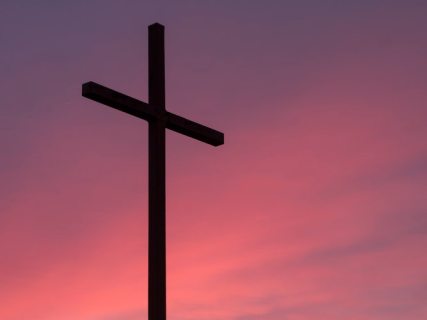 Lay: to put or set down; to place for rest or sleep

Now there was a good and righteous man named Joseph, who, though a member of the council, had not agreed to their plan and action. He came from the Jewish town of Arimathea, and he was waiting expectantly for the kingdom of God. This man went to Pilate and asked for the body of Jesus. Then he took it down, wrapped it in a linen cloth, and laid it in a rock-hewn tomb where no one had ever been laid. It was the day of Preparation, and the sabbath was beginning. The women who had come with him from Galilee followed, and they saw the tomb and how his body was laid. Then they returned, and prepared spices and ointments.

On the sabbath they rested according to the commandment.

Between the suffering and the surprise,

Between the misery and the miracle,

Between the loss and the life,

Between the death and the dawn,

We watch, for we must keep vigil.

We rest, for we must keep Sabbath.

We wait, for we must also keep

Until the new day dawns

and bids us to lay them aside.

All definitions are excerpted from the Merriam-Webster online dictionary at https://www.merriam-webster.com/dictionary/